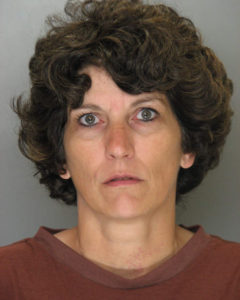 In this case, Ms. Kunkle brutally murdered her former boyfriend and the mother of their young child. Apparently, the motive was to avoid child custody issues.

The case against Cheryl Kunkle involved a lot blood spatter evidence. A blood spatter expert was able to interpret the various spatter and determine where the victim was located in relation to the bloodstains. Some of the stains were aspirated stains (the victim was coughing or breathing out his own blood). Impact marks made with the murder weapon were also discerned throughout the crime scene.

After several years of investigation by the State Police and the Office of the District Attorney, Kunkle was charged with murder.

The case was almost entirely circumstantial but each piece of evidence fit so tightly together that the plan and its execution were made readily apparent to the jury.

Kunkle waited at the top of the steps for the victim to return to his home. As he was walking up the steps and approached the top, he was hit with pepper spray in the face. He was then beat repeatedly with the baseball bat. As he fell and retreated down the steps, she continued to hit him. Eventually, he lie prone at the bottom of the steps and was hit several more times and left dead.

Kunkle was convicted of first-degree murder and tampering with evidence. She is currently serving a life sentence.

In an interesting twist, Ms. Kunkle had another child from a previous relationship, named Gregory Rowe. Mr. Rowe was 18 at the time of Cheryl’s trial.

Mr. Rowe testified against his mother at the trial. He testified that he was 15 years of age at the time his mother killed the victim. He was the driver and was instructed to drive away and return a short time later. When he returned, his mother came from the victim’s house, got into the car, and changed her clothing in the back seat while she instructed Rowe to drive away.

Various items of evidence, including a baseball bat, were subsequently destroyed by Kunkle. Mr. Rowe testified against his mother at a time when he too was facing murder charges. Indeed, he had been charged with killing a young woman and his own infant child. Apparently, the motive was to avoid child support. Although Rowe denied the killings, he was eventually convicted by a jury in Pike County of two counts of first-degree murder. Many of us suspect that he did not act alone.