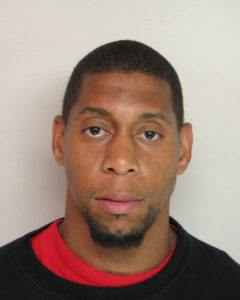 Wearing a pinstripe suit and handcuffs, Rico Herbert stood up in court Monday and turned to face the family of the World War II veteran and retired school teacher he had fatally smothered when he burglarized the man’s Stroud Township home in February 2012.

“Words can’t change what I’ve done or bring Mr. DeVivo back,” the bulky, 33-year-old former semi-professional football player told the family of Joseph J. DeVivo, whose body he had driven to South Carolina in DeVivo’s own car and then dumped in a ravine.

“This has been sitting in my heart and stomach for two years. I haven’t had even one night’s sleep,” he said.

Moments before he was sentenced to 31 to 62 years in state prison, Herbert told DeVivo’s weeping family:

“My lawyers told me not to say anything (about the murder or where the body was), but it wasn’t right. I know I’ve hurt many people, and I’m very sorry for that. I hope you can find forgiveness in your hearts for me.”

“Your Honor, I’m sorry for what I’ve done and for putting the court through this,” he said. “I ask you for mercy.”

Herbert’s attorneys said they officially notified the prosecution Friday afternoon of his intent to plead guilty Monday to third-degree murder, stealing a motor vehicle and abusing a corpse, admitting he had acted alone, in exchange for the dismissal of first-degree murder and other charges.

Herbert entered his pleas to these charges on what would have been the first day of jury selection for his trial as 160 potential jurors sat in another courtroom, waiting to be told their services were now no longer needed.

Since the prosecution was seeking the death penalty upon conviction in this case, had Herbert instead gone to trial and been convicted of first-degree murder, the jury would have then decided whether to sentence him to execution or life in prison without parole.

Herbert chose to avoid this, sparing the family from what likely would have been a long, unpleasant trial, and plead guilty to third-degree murder, punishable by the less severe sentence of 20 to 40 years in state prison.

He chose also to waive the customary time between conviction and sentencing dates, during which the county Probation Office normally does a presentencing investigation report to help the judge determine how severe a sentence to impose under state guidelines, and be sentenced immediately.

Herbert’s struggle to face the truth about his actions had been “eating him up inside,” said co-defense attorney Tom Sundmaker.

“This is a devastating tragedy to Mr. DeVivo’s family, but I’m happy we’ve come to this point,” co-defense attorney John Waldron said. “By looking in the mirror and finally coming to grips with what he did, Mr. Herbert has removed a huge burden from his shoulders.

“He’s been a model prisoner (while serving time on another case and waiting to learn his fate in this case) with a strong religious faith,” Waldron said. “The offenses in this case are out of Mr. Herbert’s character. He has a history of being a con man and a thief, but never of the type of violence seen in this case.”

Noting Herbert has shown he has a conscience by telling police where to find DeVivo’s body, Waldron asked the judge for leniency in hopes that defendants in other cases will see there can be some mercy for them if they come clean.

To further support their request for leniency, the defense had criminal case mitigation specialist and La Plume attorney Deborah Belknap testify about Herbert’s troubled past playing a role in his fate.

According to school and medical records, Herbert’s mother dropped out of school at age 16, when she had him, Belknap said.

His father physically abused his mother during and after her pregnancy, Belknap said.

Herbert’s father did the same to him, putting him in the hospital when he was 3, to the point where a child welfare agency threatened to place the boy in foster care if his mother did not leave his father.

Raised by his grandparents in South Carolina, with whom he’s close, Herbert did poorly in school, graduating second from the bottom of his class, and dropped out of college after little more than a year, Belknap said.

A father of children ages 9 and 5, with whom he’s close, he was charged in several crimes prior to moving seven years ago to the Poconos, where he started selling drugs and stealing to help support himself and his family.

Court records show Herbert committed the crimes in this case while out on bail on a previous burglary case, for which he’s now serving 21 to 42 months in state prison.

The prosecution presented Herbert, despite whatever troubled past he may have had, as someone who cared nothing about the consequences of his actions on the night of Feb. 23, 2012, when he burglarized the 87-year-old DeVivo’s home to steal money.

Herbert was familiar with DeVivo’s home from having burglarized it previously.

Herbert said he only meant to silence DeVivo’s shouts, when DeVivo woke to find him in the house, by smothering DeVivo with his own T-shirt, but ended up killing him instead.

Taking DeVivo’s wallet and credit cards, Herbert put DeVivo’s body in the trunk of DeVivo’s own car, drove to a girlfriend’s home, packed an overnight bag and then spent the night with another girlfriend at an area motel.

The next day, Feb. 24, 2012, Herbert drove to South Carolina and dumped the body in a ravine, behind a house for sale, where the body stayed exposed to the elements for almost three weeks.

The next day, Feb. 25, 2012, Herbert, seeing Onstar had been trying to reach DeVivo after his family had reported him missing, called Onstar back, posing as DeVivo, saying he knew people had been looking for him and that he was fine.

That taped phone call was played in court and likely would have been the most damning piece of evidence had Herbert gone to trial.

That phone call is how police were finally able to find Herbert driving DeVivo’s car in North Carolina and apprehend him when he tried fleeing on foot.

“When questioned at the police station about what happened and where the body was, the defendant picked up an empty plastic cup,” First Assistant District Attorney Michael Mancuso said.

Herbert eventually broke down in “crocodile tears” and told police, “I’d never do anything to hurt an old man who reminds me of my grandfather,” according to Mancuso.

Driving home the point of Herbert’s callous, murderous act for a petty theft, Mancuso held up DeVivo’s war veteran’s cap, stared at Herbert and said: “This belonged to a proud, determined man who, unlike the defendant, lived a good life, serving his country and then his community, only to see the sanctity of his home violated and his life taken in such a manner simply for his wallet and a few credit cards. This is why this defendant deserves to serve the maximum amount of time possible under state guidelines for these crimes.”

When given the chance to address the court, DeVivo’s son, Joseph A. DeVivo, recalled the elder DeVivo as “a good man,” with “many friends,” who loved and taught his three children and six grandchildren “many things.”

DeVivo “had a positive impact on many lives,” including the generations of fourth-graders he taught at J.M. Hill School in East Stroudsburg, said his son.

“It was a horrible ordeal, from the time my father went missing until more than two years later, waiting for this nightmare to end,” he said. “We finally have closure. He will be missed by many people.”

The judge imposed the maximum allowed penalty for each crime, running the sentences consecutively to both each other and the prior burglary case for which he’s already serving time.

The defense said Herbert won’t be eligible for parole until he is in his 60s.

After the sentencing, Herbert’s friend and the mother of his 7- and 3-year-old godchildren, Crystal Hadlock of East Stroudsburg, called him “a good man” who is “flawed like anyone else” and “made a terrible mistake.”

Hadlock said she understands him wanting to spare DeVivo’s family and others from a trial, but is “disappointed in him for giving up” and not wanting to “let people know the truth about what happened and who else was involved.”

Herbert initially told police a man identified only as “T.J.” killed DeVivo and that he himself only took DeVivo’s car and later dumped the body after discovering T.J. had placed it in the trunk.

Despite Herbert now admitting he acted alone, Hadlock said T.J. and others involved “need to come forward or be found and brought to justice,” but said she cannot disclose information on who these others are or how they were involved.

Mancuso said Herbert invented the fictional T.J. as a composite based on several different real people not involved in this case, similar to what Kevin Spacey’s character did in the 1995 film “The Usual Suspects.”

Joseph J. DeVivo’s family has set up a scholarship fund in his memory for East Stroudsburg High School students (both North and South), with his son, Joseph A. DeVivo, as president. The Joseph J. DeVivo Memorial Golf Tournament, scheduled for June 1 at Southmoore Golf Course in Bath, benefits the fund. Information is available at jepesta.wix.com/joedevivomemorial.