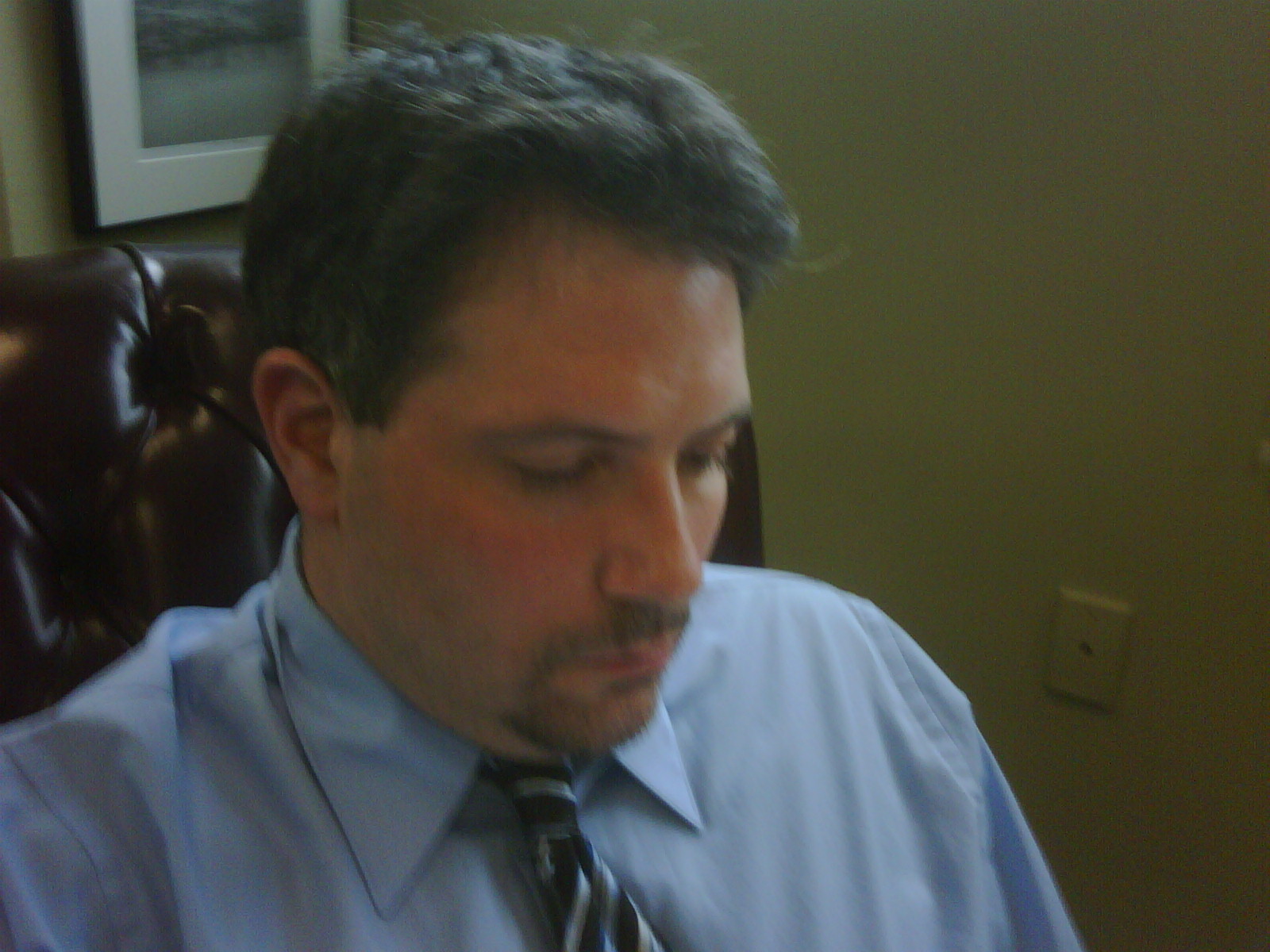 Following high school, I attended Kutztown University where I studied political science and history. I graduated from Kutztown in 1987.

I attended law school in Jackson, Mississippi at the Mississippi College School of Law.  Some of the best professors I had taught there; including the late professor Jeffrey Jackson, who was able, by his talent as a teacher, to make me a critical thinker and even enjoy the first year law class of Contracts

After my first year of law school, I transferred to the Dickinson College School of Law in Carlisle, Pennsylvania. At Dickinson I took up many classes dealing with advocacy, trial work, and the rules of evidence.

During my second and third years of law school, I worked for a law firm in Carlisle, Pennsylvania. That job provided me with great practical experience.

After passing the bar in 1992, I obtained employment in Stroudsburg at the law firm of Robinson, Hoffner, and Billick. I worked at the law firm for about a year. I practiced in many areas of civil litigation including personal injury defense and family law.

A Calling for Public Service

One day I was representing a family against Children and Youth Services at a dependency hearing before Judge Peter O’Brien. Present during the hearing was then Assistant Public Defender Mark Newman. At the conclusion of the hearing, Mark asked me if I was interested in becoming a Public Defender. Shortly thereafter, I met with the then Chief Public Defender Mike Muth who hired me as a Public Defender in his office. This was in December of 1993.

I don’t know of anything that could’ve trained me as well for my future role as a prosecutor than those years I spent as a Public Defender.

Within two weeks of the start of my job I was in a jury trial defending an individual against burglary and assault charges. The jury’s not guilty verdict was great motivation for me to intensify my learning of the rules, and the various stages of trial such as direct examination, cross examination, opening statement, closing argument, etc.

The learning curve for a new lawyer in a public defender’s office is steep. I studied by watching others, asking a lot of questions, and getting thrown into the mix. Preliminary hearings, omnibus pretrial motions, jury trials, sentencing hearings, parole violations, mental health hearings, Children and Youth dependency hearings, protection from abuse hearings – you name it.  One of the things I learned from my days boxing, which was taught to me by an old trainer named Ernie Butler of Easton, Pennsylvania, was to “be a thief”.  In other words, watch the other guys in the gym, mimic what they did, and if it worked, keep it and refine it.

During my time in the Public Defender’s Office, we had a number of hardworking, dedicated, and talented Public Defenders: Mike Muth, Mark Newman, Colleen Nevins (now Colleen Mancuso), Brian Gaglione, and Brian Germano.  Both Mike and Mark were excellent teachers.  The esprit de corps was high. Indeed, I estimate that our success rate in front of juries was around eighty percent.  All of us were constantly discussing our cases with one another and sharing ideas and insight.  As a Public Defender, I handled hundreds, if not thousands, of cases, including over fifty jury trials. The crimes my clients were charged with covered the entire range of the Crimes Code, i.e., murder, rape, robbery, arson, attempted murder, drug delivery, DUI, white collar crime, etc.

After a couple of years, I was promoted to the position of First Assistant Public Defender. However, I found it difficult to pay my student loans and other bills. Most people in our community are unaware that the salary of a full time Public Defender (as well as a full time Assistant District Attorney ) is meager.

For a while, I moonlighted by doing legal research and preparing briefs for a local civil lawyer. I then started to look for other employment. At that time, I was offered the opportunity to transition to a part time Public Defender. The salary was a bit lower, but the part time position allowed me to open my own law firm. I accepted the kind offer from Mike Muth.

Around that time, I was defending a fourteen year old who along with an eighteen year old brutally murdered an elderly couple in their own home. My co-counsel in that case was my good friend, and then special public defender, Dave Christine. Both Dave and his father, the late Elmer Christine, offered me space at their firm to rent an office.

I worked as a solo practitioner beginning in 1997 through 2000. In addition, I kept up my duties as First Assistant Public Defender continuing to represent various clients. Most of the clients I represented at that time were charged with very serious offenses.

I remember one day, after a hearing in a murder case, being approached by a family member of the victim. The person was very upset with me and said to me that she hopes that a family member of mine would be murdered so that I would know what it felt like. At the time I brushed the words off as being taken in the context of an emotional, distraught, grieving individual. It was not until I became an Assistant District Attorney, actually prosecuting murderers, and dealing closely with the families of the victims that the words came back to me.

So in the year 2000, I said goodbye to my Public Defender position and the colleagues of that office. I recall fondly their farewell to me included a certificate and a coin. On the coin was the phrase “Justice Justice Thou Shall Pursue”. I knew exactly what was meant. Mainly, that the role of a prosecutor is more than that of a mere advocate. The prosecutor must also seek justice by everything he does with respect to those whom he prosecutes, the victims, their families, and the community as a whole.

Although I had a very strong foundation in criminal law, and knew virtually every tactic, strategy, or defense trick, I found, at least initially, the role of a prosecutor to be an unaccustomed one. However, that feeling didn’t last long. I soon grew accustomed to the process of seeking justice in everything I did versus advocating for one position or another without regard to the impact of the ultimate result. I also realized that as a prosecutor one can employ a much greater degree of freedom and imagination in building a case. It is that use of imagination and freedom in seeking the truth and proving it before a jury that is the single most fascinating aspect of the job.

In 2004, Dave Christine was re-elected as District Attorney. He had been District Attorney prior to James Gregor and Mark Pazuhanich. I remember the night of the election, Dave and I had just completed a murder trial involving the tragic death of a young woman at the hands of her then boyfriend. The jury rejected the defendant’s claim of suicide and convicted him of third-degree murder. In other words, that, with malice in his heart, he killed the woman. Both Dave and I were grateful that justice was done by the jury in that verdict.

On this page, I will highlight some of the past homicide prosecutions and provide information and updates on the status of the pending ones.

In addition to my duties with the office of District Attorney, from 2001 until 2016, I worked as a partner in private practice with the firm of Mancuso & Mancuso, P.C., in Stroudsburg, Pennsylvania. My wife, the Honorable Colleen Mancuso, was my partner. Colleen and I focused on all types of litigation, estates, wills, trusts, and family law.

In 2011, Colleen won election to the Office of Magisterial District Judge for Chestnuthill and Jackson Townships.  Her coverage area was later changed to cover Chestnuthill, Eldred, Polk, and Ross Townships.

For several years, before she became a judge, I had the pleasure of working with Colleen in the DA’s Office.  It was an exciting time.  One of the highlights was Colleen’s successful prosecution of Hugo Selenski for a home-invasion robbery.  Selenski was given a sentence of decades and was the harbinger of successful multiple murder prosecutions brought in Luzerne County.

I recall with pride how, during one criminal trial term, Colleen and I earned five criminal convictions for major crimes.  The former Pocono Record writer William Doolittle did a very nice story about that entitled, “Husband and Wife Crimefighters”.

In 2016 we closed the doors on our law firm. I became full-time in the DA’s Office and Colleen focused on the demands of her position as judge.

I have presented lecture sessions involving aspects of criminal law and trials through the Pennsylvania Bar Institute to other attorneys as part of required continuing legal education. I also have presented lectures involving multi media dealing with the right to conceal carry in Pennsylvania and aspects of ‘justification’ or the law of self defense to the general public.

Etna – A Murder Out of Time

I also worked with Chief County Detective Eric Kerchner, on our own time, to solve the horrible cold case murder of 17-year-old Etna Bittenbender, who was bludgeoned to death on October 31, 1880.

In October of 2020, 140 years later, Chief Kerchner and I published a book about the case called “Etna – A Murder Out of Time” where we are proud to finally tell the forgotten story of her murder.