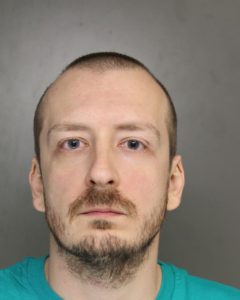 Justin Reynolds, 33, of Eldred Township was arrested this morning and charged with possessing and disseminating child pornography.

Earlier this month, detectives from the Monroe County District Attorney’s Office discovered a computer on a peer-to-peer file sharing network offering to share videos of child pornography with other users. Those files included children as young as toddler-age being sexually abused by adults.

County detectives and Troopers from the Pennsylvania State Police arrived at Reynolds’ Silver Spring Boulevard home this morning armed with a search warrant. Inside, investigators found Reynolds’ laptop computer which contained evidence of the downloading and sharing of child pornography.

Reynolds admitted to downloading child pornography, stating that he would delete the files shortly after viewing them as he knew it was “wrong”.

Reynolds was charged with several counts of both possessing and disseminating child pornography, and a single count of criminal use of communication facility. All charges are felonies.

Reynolds was arraigned before Magisterial District Judge Colleen Mancuso of Brodheadsville and released on $25,000 unsecured bail. He is tentatively scheduled to appear for a preliminary hearing on March 16, 2018, at 11:00 A.M. before Judge Mancuso.