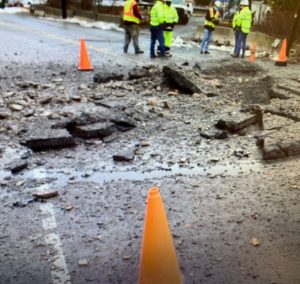 On Friday, December 25, 2020, at approximately 1:30 AM, members of the Pocono Township Police Department responded to the scene of a single motor vehicle accident with entrapment on Lower Swiftwater Road. Officers discovered a blue Ford Explorer off the roadway, lying on its roof.

One of the passengers of that vehicle, Jobanni Peralta, age 49, a resident of New York, had managed to extricate himself and advised the officers that three other persons remained inside the vehicle.

Officers were able to extricate the driver Luis Mercado, age 33, a resident of New York, and his minor child, age 2.  The child appeared uninjured and was removed from his child car seat.

The fourth passenger, 33 year old Ana Abreu, also of New York, was extricated with assistance from the personnel of the Pocono Township Volunteer Fire Department. Ms. Abreu had suffered from trauma to the head and was transported by ambulance to Lehigh Valley Hospital – Pocono. Unfortunately, Ms. Abreu succumbed to her injuries and was pronounced dead at LVH-P at approximately 2:50 A.M.

Officers at the scene noticed a gas propane like smell. The sound of the leaking gas could be heard from the roadway. The roadway itself suffered considerable damage as a large hole with sizeable debris consistent with pavement, dirt, and stone was observed in the east bound lane.

The scene was documented by members of the Pocono Township Police Department, the Monroe County District Attorney’s Office, and the Office of the Coroner. Additionally, employees of the UGI utility company arrived on scene and were able to turn the gas off and repair the damage. We have been advised that no further threat remains.

An autopsy of the victim has taken place and we are awaiting the findings from the forensic pathologist. This matter is currently being investigated by the Monroe County District Attorney’s Office, the Office of the Coroner of Monroe County, and the Pocono Township Police Department. An investigation is also being conducted by the Pennsylvania Utilities Commission. Further information will be provided to the public as it becomes available.

Anyone with information concerning this matter is urged to contact Detective Tom McMahon of the Monroe County District Attorney’s Office at 570-517-3025.