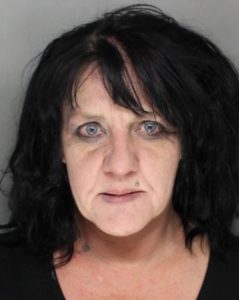 operation, detectives from the Monroe County Office of the District Attorney arrested Tammy Curran, 49, of Florida, for prostitution related charges.

Detective Kim Lippincott learned that Curran had been staying at a hotel located in Smithfield Township, Monroe County.  Curran had an advertisement posted on an online website known to be used for promoting prostitution and sex trafficking.

Detectives responded to the advertisement and Curran replied indicating exactly which sex acts she was willing to perform and the price of those sex acts.  An arrangement was made to engage in sex for one hour in exchange for $220.  Instead of meeting a john, Curran met with an undercover detective at the hotel and was subsequently was arrested for prostitution.  After her apprehension, Curran told detectives that there were drugs in her room and provided consent to search it.  Officers located a small amount of marijuana and a smoking device in the room.

Due to her lack of residency and no family in Monroe County, bail was requested by the Commonwealth.  Magisterial District Judge Michael Muth arraigned Curran and set bail at $1,000.  Curran is currently being held in the Monroe County Correctional Facility and will appear for her preliminary hearing on Wednesday May 21, 2019, before Magisterial District Judge Brian Germano.

This arrest is part of the District Attorney’s Office and Drug Task Force’s ongoing efforts to combat sex trafficking and illicit drug use in and around Monroe County.  Detectives work with multiple organizations both locally and nationwide to help provide women involved in prostitution or sex trafficking with shelter placement and rehabilitation.

If you suspect someone is being trafficked, please call the National Human Trafficking Hotline, 888-373-7888 or submit an anonymous tip to our Criminal Investigations Division at www.monroecountyda.com.