The Report and Recommendations of the Eighth Monroe County Investigating Grand Jury involving the Pleasant Valley School district has been released to the public.  The Report dated September 25, 2018, was under review by the Supervising Judge of the Grand Jury, Margherita Patti-Worthington until it was released today.  Judge Worthington allowed several responses to be attached to the Report in accordance with the Grand Jury Act.

The investigation began in May of 2017 and involved the testimony and interviews of sixty four (64) witnesses and the review of over twenty thousand (20,000) of pages of documents. In addition to the Report, Presentments were previously issued recommending criminal charges against three individuals i.e., Joshua Krebs, Chris Fisher, and Carole Geary. Mr. Krebs was also charged with perjury relating to this investigation.  The Report offers insight into the lengthy investigation, details of the information received in the course of the investigation, and recommendations for Pleasant Valley School District going forward.

The Grand Jury described the results of its investigation as follows: “…these findings all corroborate a culture of cronyism, bullying, intimidation, and retaliation exercised by prior administrators over staff members. The findings show that in many cases the best interests of the students and district were ignored to advance selfish goals. These interests favored a select few for advancement, despite some lacking mandated qualifications, or shielding the favored from appropriate discipline or other scrutiny. This cronyism had the effect of shattering the morale among both the professional and the support staff. Furthermore, those brave enough to criticize the status quo, or who voiced dissent with reference to efforts of the school administration, were frequently made the targets of retaliation.”

The Jury also reported on the current administration noting that: “Much of the bullying has diminished under the current administration of Superintendent David Piperato and the present composition of the School Board. Many teachers and support staff have noticed a change for the better. However, certain concerns remain, including the appearance of continued targeting by the administration of critical voices. The culture seems to persist and is made apparent by an attitude of some in the current administration and Board who view this investigation not as an impartial fact finding process but … the result of a ‘vendetta’ by a ‘small minority’ of troublemakers among the staff. This persistent mindset has fostered an ‘us versus them’ mentality that undercuts improvements being made under the new administration. This mindset has also been responsible for some of the hostility and suspicion expressed towards this investigation.”

On behalf of the District Attorney’s Office we would like to thank the Investigating Grand Jury for the diligence and hard work put into this matter.  The Jury’s careful consideration of these important matters will go a long way to help the school district continue to make improvements and ensure that the culture of intimidation and bullying is at an end.

A copy of the full 106 page Report and attachments can be viewed below: 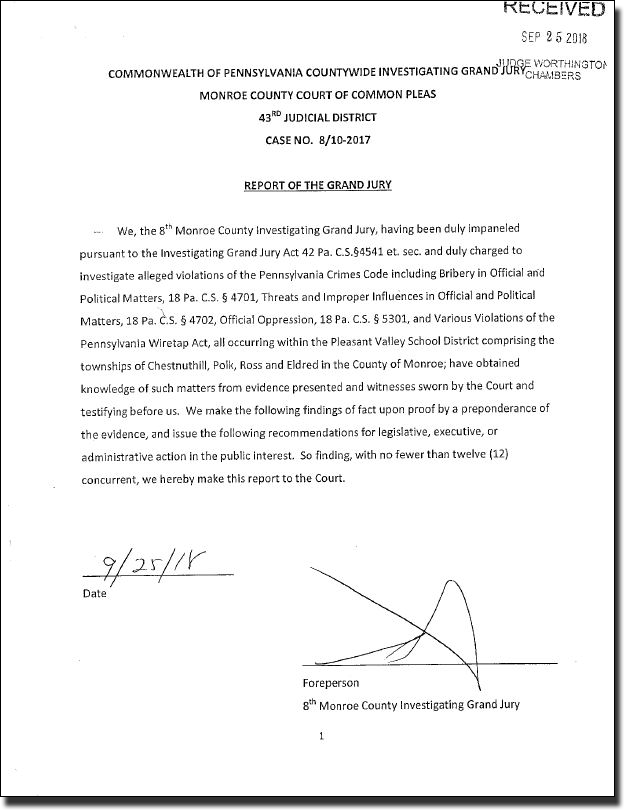