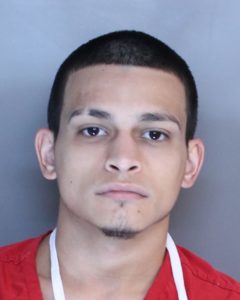 Danny Makaveli ZAYAS, Jr., 23, of Walbert Drive in Hamilton Township, was arrested Friday and charged with sharing images of child pornography on Snapchat.

Last week, detectives from the Criminal Investigations Division of the Monroe County Office of the District Attorney received information that an individual was uploading and sharing images of child pornography on Snapchat.  That report, filed with the National Center for Missing and Exploited Children by the staff of Snapchat, led investigators to identify ZAYAS as the owner of that Snapchat account.

On Friday, investigators set up surveillance on ZAYAS’ home and eventually observed him leave the residence in a vehicle.  Armed with a search warrant, detectives stopped the vehicle on Interstate 80 and took ZAYAS into custody.

A search of his cell phone revealed several hundred images and videos of child pornography, some depicting children as young as five (5) years old engaged in sex acts with adults.

ZAYAS was charged with multiple felony counts of possessing and disseminating child pornography and related charges.  He was arraigned by Magisterial District Judge Michael MUTH of East Stroudsburg and placed in the Monroe County Correctional Facility on $10,000 bail.

ZAYAS’ preliminary hearing is scheduled for Friday, November 13, at 10:00 am before Magisterial District Judge Thomas SHIFFER of Stroud Township.