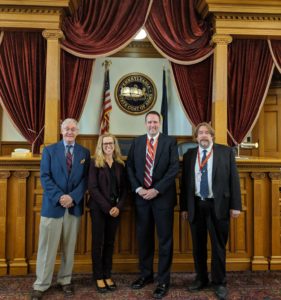 On Wednesday, May 15, 2019, detectives Wendy Bentzoni Serfass and Craig VanLouvender appeared before President Judge Margherita Patti-Worthington to be sworn in to their new positions with the Monroe County Office of the District Attorney.

Wendy Bentzoni Serfass has been a detective with the Office of the District Attorney since October of 2006.  She was originally hired to work under the Violence Against Women Act focusing on Domestic Violence and Sexual Assault.  She is now assigned to Major Case Investigations including homicides.

Overall, Detective Serfass has worked for the County of Monroe for over 25 years. She is married to Troy Serfass and together they have raised four (4) daughters, Shelby, Sierra, Madison and Elena.

Craig Vanlouvender entered the Pennsylvania State Police Academy on October 5, 1992 and graduated February 24, 1993.  After graduating from the academy Craig was assigned to the patrol unit at Troop ”N” Swiftwater, Monroe County.  While assigned to the patrol unit Craig was tasked with patrol related functions including traffic enforcement, accident investigations and responding to and investigating criminal incidents.

Craig graduated from the University of Scranton in 1997 with a Bachelor’s of Science degree in Criminal Justice.

According to District Attorney Christine, “Detective Vanlouvender had an exemplary career as a State Trooper and will be of great service to our citizens.  Detective Sergeant Serfass has distinguished herself since she became a detective in 2006 and deserves to be named second-in-command of our Criminal Investigations Division”.